LegalReformMN.org is primarily focused on exposing crimes and unethical actions committed by four public officials in Ramsey County, Minnesota. Compelling evidence is presented. This site was reluctantly created after the people named repeatedly refused to explain their actions. All four should at a minimum be removed from office. Their stunning embrace of crime and corruption is simply an affront to justice and rule of law.

The four public officials are: 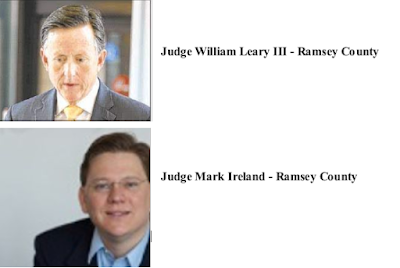 The Background and Evidence sections clearly demonstrate that crimes were committed by a lawyer which Choi, Dusterhoft, Leary, and Ireland all chose to either turn a blind eye to or in several instances reward. Their actions are similar to Nixon's in the Watergate scandal where he got into trouble not because he committed the original crime but because he tried to illegally cover it up. Covering up a crime is a crime.

The Wrongdoers section has an full list of people, mostly not named, who also committed crimes or unethical actions.

Much the motivation for the creating of this site comes from protests that arose after the murder of George Floyd. If it were not for the public outcry it is doubtful Derek Chauvin would have been convicted let alone charged with Floyd's murder.  The About section has a more full explanation of the motivation behind the creation of this site.

Email ThisBlogThis!Share to TwitterShare to FacebookShare to Pinterest
Home